Vice President, Dr Mahamudu Bawumia when he delivered congratulatory remarks at the aiden Responsible Small Scale Mining Awards” organized by the Ministry of Lands and Natural Resources in Accra on Wednesday, December 22, 2021 said,  all too often, the problem solving tends to focus more on chasing and punishing wrongdoers and less on recognizing and rewarding those who do right. This is what makes this awards different.

This award recognizes players in the small scale mining space who, despite the temptation to join the wrong-doing band wagon, have decided to stay within the relevant regulatory framework of the country and operate responsibly.

This award scheme is organized and designed to recognize and reward responsible miners and other stakeholders in the small scale mining industry, this award is to provide affirmation for those who operate within the law and not illegal miners, and reinforce Government’s desire to achieve sustainable, responsible small scale mining working in partnership with all stakeholders.

At a ceremony attended among others by the Chief of Staff, Mrs Frema Akosua Frema Osei-Opare, Minister for Lands and Natural Resources Hon Samuel Abu Jinapor and his two Deputies, Hon George Mireku Duker and Hon Benito Owusu Bio, Chief Executive of the Minerals Commission, and other stakeholders in the mining industry, Bright Kwabena Obeng of Obeng Mining Ventures was adjudged the Overall Best Small Scale Miner.

Small scale mining, he noted, is not only competing with agriculture for land but is damaging waters and imposing huge costs on water systems, hence the Akufo-Addo government’s decision to re-engineer the governance framework of the sector through diverse interventions in an attempt to sanitize the Small Scale Mining (SSM) subsector in particular.

Government, he reiterated, would continue to play its watchdog role in ensuring compliance with the law while working with stakeholders to address the growing complexities in the mining sector.

“As a government the responsibility of being accountable for the stewardship of this sector by ensuring good governance in the exploitation of the minerals resources is not lost on us. We will continue to implement policies that will bring about a win-win situation for both government and industry players through effective collaboration with all well-meaning stakeholders like the Ghana Association of Small Scale Miners,” he assured.

Dr Bawumia commended the Small Scale Miners, saying that, the membership of the Ghana Small Scale Miners Association (GNASSM), he wish to acknowledge their cooperation with government in the implementation of the various interventions. 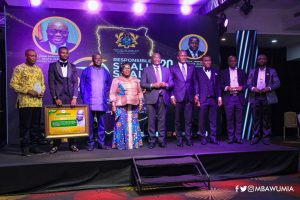 He continued  that even though some of these interventions have affected them in one way or the other, most of them decided to work with government in streamlining the sector by doing the right thing. It is, therefore, worthwhile recognizing thier efforts for choosing to regularize their  activities and continue to apply themselves well to the obligations imposed on them by their mineral rights.

“I believe the awards will go a long way to motivate you to continue doing the right things when they matter most. The award should also increase your sense of responsibility in the generality of your membership towards the natural environment. So that we shall together achieve the desired sustainability for the subsector.”

Adwoa Safo In Hot Waters… As Petition Filed For Her Removal

Get the latest sports news from FussGhana about entertainment, sports and politics.

Get the latest updates from FussGhana on entertainment, art, sports, politics and more